When your motors require frustrating design change, ASPINA provides a trouble-free solution to replace them 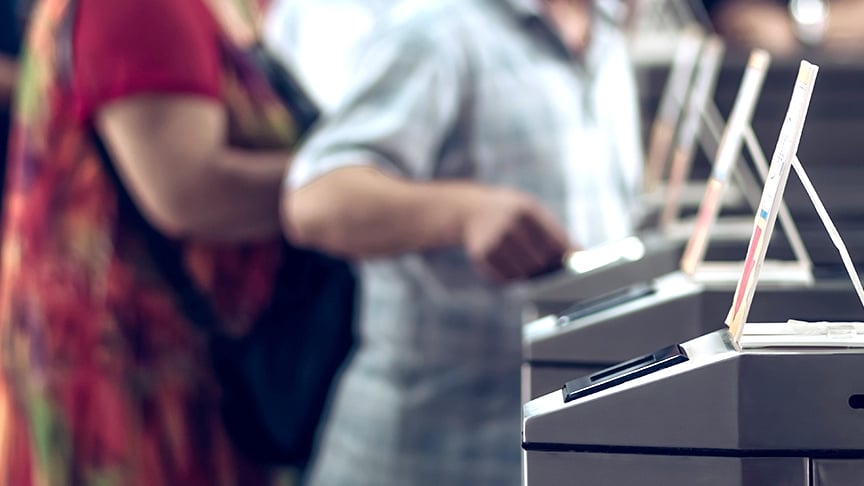 Risk of major accident as people knocked over by security gates opening and closing at inappropriate timings, ...

Security gates are used to enhance security, with more and more companies installing them in response to demand for greater security at offices and other facilities. A company that develops security gates (Company A) was contacted by one of its customers informing it that the flap of the security gate installed in its office had knocked over a member of this customer company's staff. The customer was concerned about the safety of the security gate and wanted to know what could be done about it. The circumstances of the case involved several thousand people congregating toward the security gates each day. Busy times at the start and end of the working day would see a build-up of numbers at the gates. The accident itself involved someone being hit by the gate and knocked over as a result of the speed and timing of its opening and closing being out of sync with the movement of people passing through.

One of the development staff at Company A summed this up, saying to us, "We needed to do something quickly to provide our customer with gates that would keep their staff safe."

"There is no way to make fine adjustments to the motor, and we can't find any compatible alternatives to the motor."

The development staffer at Company A also made the point that, "Keeping the speed and timing of the gate opening and closing in sync with the flow of people required adjustments on the motor and the controller that operated the gates. Unfortunately, we were unable to make these detailed adjustments ourselves because we lacked anyone with the necessary expertise."They also realized that simply adjusting the speed and timing of gate operation would not keep up with people trying to run through the gate and therefore that it would not prevent collisions. Only adjusting the opening and closing of the gates would not be enough to prevent people from being knocked over.

Company A contacted the supplier of the motor used in the gate opening/closing mechanism to ask if an alternative was available that would solve the problem. What it was told in reply was not only that no other motor could work with Company A's existing security gates, but also that major changes to auxiliary components would be needed to enable adjustments to gate opening and closing with the existing motor. Replacing those components would incur even greater time and cost.

Wanting to resolve their customer's safety concerns quickly but lacking any good way of doing so, Company A was unable to make any progress on development.

It was around this time when they consulted ASPINA. The developer from Company A had heard about ASPINA's strengths in customizing motors for specific purposes from someone in another department who suggested getting in touch.

On receiving the inquiry, an ASPINA salesperson stopped by the site where the gate was installed to hear about the problem. The salesperson tells of how he/she and the site personnel realized, after discussing the problems and tossing around ideas while inspecting the gate, that they needed to meet again soon to gather more details. Accordingly, a meeting to be attended by ASPINA development and design engineers was arranged for a few days later.

The development strategy for gate operation decided at the meeting was as follows: "Instead of using a mechanical mechanism to hold the gate closed, the flap would be held in its current position, whether open or closed, by a very weak force. Accordingly, if a collision happened because the flap failed to keep up with the person passing through, the movement of the flap would be stabilized by using motor torque to absorb the energy of impact. By avoiding heavy contact between person and flap, this would prevent people from being knocked over."

Implementing a control mechanism that would enable impacts to be absorbed by motor torque required detailed adjustments to the motor and coordination with the flap movement and other factors. This was done by drawing on ASPINA's expertise in motor control.

Another issue was whether the new motor would be able to work inside the company's security gate. This was verified by fine tuning to suit the gate, which ensured that ASPINA's motors and controllers would do the job. Along with supplying the new motors and controllers, ASPINA also took responsibility for the supply of auxiliary mechanical parts. ASPINA handled everything from design to production, with assembly of the motor and mechanical parts being done at its factory prior to delivery. This saved the company considerable time compared to ordering each of the parts individually. As a result, the improvements were completed ahead of schedule.

The ASPINA engineer visited the site where the product was installed and attended testing. This meant that Company A personnel were on hand to be consulted as the work progressed. As Company A noted, "Being able to make product adjustments in front of the customer gave me a sense of confidence and also contributed to the positive response from them."