The startup succeeds in prototyping with ASPINA's manufacturing expertise

Prototyping for a proof of concept is the first challenge a startup faces when they want to turn their concept into an actual product. We see some startups encounter trouble with drive systems and motors at this very early stage of their product development.

Company D, a university start-up, was trying to commercialize a service based product that uses technology to predict the propagation path of sound in a specific space and emits a narrow directional sound (sound spotlight). Creating a "personal sound space" is a unique feature of this service.

The product has a pan tilt mechanism that points the ultrasonic speaker in the desired direction, and the speaker sends out a narrow beam of ultrasonic waves. The beam is then reflected off the floor or walls like a billiard ball to deliver sound only to a specific person.

Company D only had a rough idea of making the speaker swing vertically to an elevation angle of about 90 degrees and horizontally to about 180 degrees. The CRO of Company D recalled, "We developed a prototype made by attaching a servo motor purchased in the market to a housing made by cutting out a panel with a laser cutter. However, it happened to make an annoying 'eeeee' noise and its motion was terrible."

Company D made its own pan tilt mechanism using a servo motor, but its movement was not accurate, and it produced a high-frequency metallic sound noise. The Company did not have the know-how to solve these problems.

They wanted to move on to mass production designing to commercialize the product as soon as possible, but instead they were not even able to conduct demonstration experiments on their target users.

Company D started to search for a manufacturer who had engineering capability of design for manufacture. However, the CRO said it had been difficult to find a company around them that could build a pan tilt mechanism for the final product.

At that time, Company D was participating in a community called "Startup Factory," which is an advocate group of startups and manufacturers that are willing to support them. When they approached ASPINA they learned that ASPINA was familiar with motion control and had created a similar pan tilt function before.

Company D had expected that if they consulted with ASPINA, ASPINA would immediately start development and design the mechanism on the manufacturable level, and Company D could move on to the mass production phase. However, they realized they were not able to get it right away with just limited communication.

They had not clarified the performance they wanted from the mechanism nor the way it works with the speaker system. The CRO of Company D recalled "we were only able to give them a rough idea of what we wanted, such as "just give us the best possible one."

Later in the design process, Company D found out that their software that controls the motor had to be improved to apply a function to follow the target person. Company D then realized that the mechanism could not meet the performance requirements unless they designed at the intersection with hardware, electric control, and software.

Company D noticed it was difficult not only to obtain a sample capable of producing desired performance, but also to start preparing specifications and drawings immediately.

Rather than preparing specifications and drawings without prototyping, we at ASPINA suggested to start prototyping with a similar sample we already had, and then go through several cycles of experimentation, validation, identification of issues, and revision of specifications.

ASPINA proposed, "We have a prototype sample that could perform similar motion to the pan tilt mechanism for now. We developed it for a pan-tilt mechanism in another project. Why don't you try using this first, and evaluate its performance, point out any excesses or deficiencies, and we can work together to meet the specifications."

The sample we offered was a pan tilt mechanism that combined a low-profile BLDC motor with pulleys and belts to orient a small camera to a specified direction.

Company D wanted to develop the product quickly in a short period of time, and they decided not to have ASPINA make a prototype from scratch but to use the proposed existing sample.

The biggest concern was that the rotational sound of the motor used in the pan tilt mechanism would interfere with the speaker sound and the ultrasonic speaker would not perform as intended. Since we were able to make concrete motor specifications by evaluating the prototype with the sample in the initial stage of the prototyping process, we were already able to overcome this concern in the second prototype.

Finally, ASPINA proposed a mechanism to ensure the motor torque necessary for pivoting while minimizing the motor noise. Company D appreciated this mechanism as a proposal that could have only been made by a company with many years of accumulated know-how in drive systems and motors.

In the sub-project of design for manufacture of the pan tilt mechanism, Company D and ASPINA spent time to share an understanding and reach an agreement on how to carry out the sub-project. After that, we repeated a cycle of building and validating prototypes to prepare the specifications of the mechanism. Company D thought later that this approach had ended up saving time for their entire project.

Company D learned that hardware that controls movement with software, such as this pan tilt mechanism, needs to be developed in the intersection between software and hardware, and without ample experience, it would be difficult to carry out the project efficiently and achieve the performance and quality they desired. Furthermore, Company D realized again that it is important to implement prototyping and validating as early as possible in order to see how the entire product would work and make the best specifications. 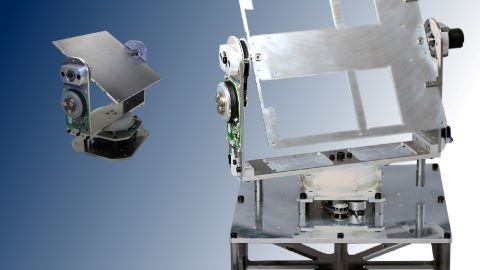