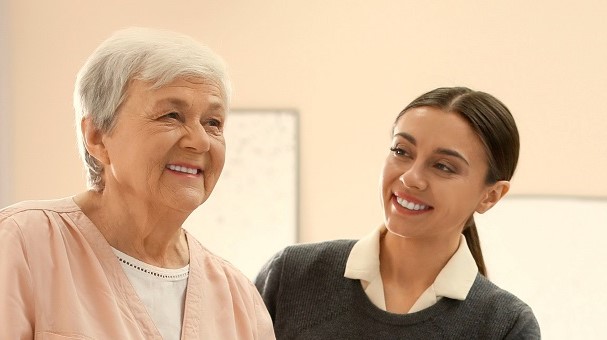 "We had to do something about the actuator making it too bulky, ..."

This was the concern expressed by one of the design and development staff, Engineer F, working on a power-assist suits for the nursing equipment made by Company A.

While an aging population brings increased demand for nursing care, the industry is beset by chronic labor shortages. One of the major reasons for the labor shortage today comes from the negative image of the physical stress imposed on care workers when they need to move patients. Numerous instances have been reported in the media about people having to quit the industry after developing back strain and other such conditions.

Wanting to address society's need to stem the high levels of staff turnover in the nursing care industry, Company A set about developing a power-assisted device that could be worn by care workers to protect them from lower back injuries.

A prototype of the device was produced under the supervision of Engineer F quoted above. Unfortunately, what happened when Company A tried the device on was that its bulk impeded the wearer's movements, obstructing the task of moving patients. The motor they were using was combined with a gear box and encoder, making the overall actuator quite large and adding to the bulkiness of the power-assisted device.

The thickness of the device was more than double the target that had been set.

Beyond size, fundamental issues with power-assisted devices had to be addressed, but the company did not have the expertise to resolve them

The size of the actuator was not the only problem.

It also became clear that the power-assisted device would require precise control to suit the body of the care worker wearing it. Achieving this ideal of precise control using conventional control techniques from the past would have been difficult, on the contrary, there was all the more risk of injury to the wearer.

Expertise in the control of motors was going to be needed to achieve precision in the movements of the power-assisted device. Unfortunately, Company A lacked anyone with such specialist knowledge. Nor did they have any experience in using motors to implement the sort of control they were seeking.

Before doing anything about the motor, the engineer consulted with ASPINA, a company they had dealt with in the past.

What sort of motor could solve both problems at once?

Soon after the contact, the person from ASPINA who visited the company had a suggestion: "To deal with the problem of the motor being too bulky, you could try using a flat motor with the reducer and encoder built in..."

The flat motor provided as a sample was even smaller and lighter than Company A's engineer had been expecting, so much so that concerns were raised as to whether such a small motor would really have sufficient power. The ASPINA representative reassured them that this would not be a problem.

Confident that they would be able to achieve the target thickness, the engineer quickly set about building a prototype using the flat motor. This new prototype ended up being more than fifty percent slimmer than its predecessor.

The other issue of precision control also proved easy to overcome using the fine torque control provided by a small, multifunctional servo driver. In this way, the company succeeded in building the power-assisted device the way it had intended.

ASPINA participated in Company A's development project, helping to address the complex problems that routinely arose during the work. This participation also helped Company A gain a lot of experience on handling motors.
In this way, the development of the power-assisted device was successfully completed more quickly than the company had anticipated.

The flat motor used in power-assisted devices can be customized and supplied in small quantities. This prospect of also being able to make use of it in other products has left the company's engineer confident of being able to meet user needs with greater flexibility than before.