Different types of DC motor and their respective features 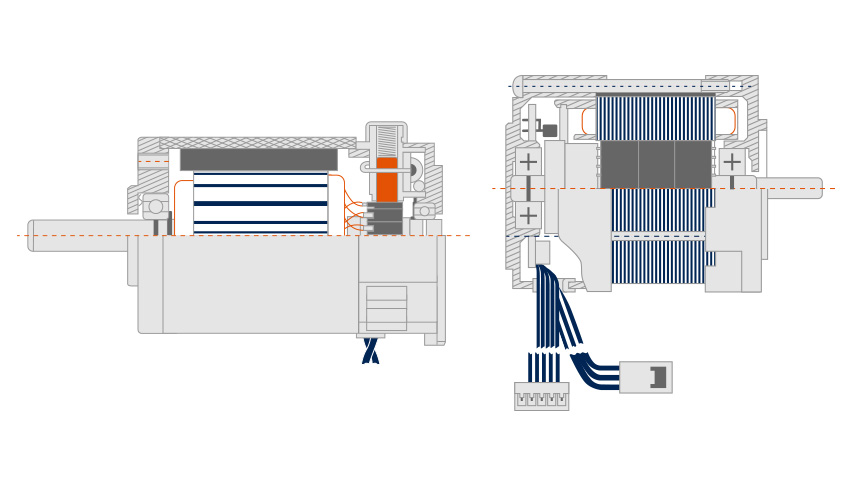 “Electric motor” is the general term for a machine that converts electrical energy into mechanical energy. This type of motor is widely used in products such as home appliances, robots, and pumps.Use of electric motors has also grown considerably in the automotive field over recent years, not least of which is their use in electric vehicles.

Electric motors come in many different varieties, one of which is the DC motor, where DC is an abbreviation of “direct current”. These DC motors are used in a wide range of familiar products. They can be further divided into brushed and brushless motors.

DC motors are either brushed or brushless.Brushed motors are driven by connection to a DC power supply. As brushed motors maintain physical contact between the brushes and commutator as they rotate, both of these parts are subject to wear. Moreover, brushed motors also generate sparks when making and breaking the electrical contact between brush and commutator. This in turn generates electrical noise. Mechanical noise is also produced by the two parts rubbing against one another.

Brushed DC motors can also be further divided into permanent magnet motors and electromagnet motors, each of which has different characteristics.

Globally, this type is widely used in applications such as auxiliary automotive motors or in model cars or boats. They can also be further subdivided based on the design of the rotor, into slotted, slotless and coreless motors.

Electromagnet motors are divided into shunt motors, series motors, or separately excited motors depending upon how the rotor winding and field winding are connected together. In terms of motor output, these configurations are used in mid-range to heavy-duty motors.

Brushless DC motors are used in a wide range of applications and can be divided into the following types based on how the permanent magnet is fitted into the rotor.

The embedded magnets of IPM motors make them mechanically safer than SPM motors and capable of faster speeds.

The two types of motors have the following characteristics.

SPM motors have permanent magnets attached to the surface of the rotor.

IPM motors are a type of permanent-magnet synchronous motor (PMSM). They are rotating field motors that have permanent magnets embedded inside the rotor.

For example, IPM motors are used in hybrid and full electric vehicles. These high-performance motors are able to operate over a wide range of speeds, allowing them to match the high speed of a vehicle engine. 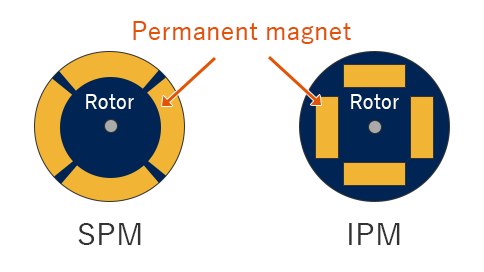 DC motors are found in a wide range of applications

DC motors are found in many different applications, not just in daily life, but also in offices and factories. Examples from the home include refrigerators and water heaters, also fans and other air conditioning systems.Commercial uses include copiers and printers as well as the ATMs operated by banks.

These are just some of the many areas of our daily lives in which DC motors are found, with other examples including vehicles, medical and measurement equipment, and residential building systems for things like ventilation.